Been a while. I keep meaning to update, writing the posts in my head, then never actual typing them up. :shrugs:

I'm feeling disconnected - from just about everything. Some of it is the season. I am definitely seasonally affected, and it seems like it gets worse every year. Last year was the first time I had to dig deep into reserves I don't have any more to keep from giving up - and I was discovering writing last year. This year, it's only October. How the hell am I supposed to get through the rest of the year?

My mom's been dead eleven years next month, and last night, I had the first dream I can remember about her. In my dream, she was tall and straight and strong, hair flaming red falling in waves past her shoulders. Happy. Much as she was before she made the conscious or unconscious decision to drink herself to death. What was weird about this dream, though, is that when someone told me they'd seen her, I dismissed it. "No, mom's dead. She died a long time ago." Then I caught sight of her, standing half a football field away in a crowded parking lot, and I was terrified. I ran. Then the dream switched scenes, as dreams do, and I was sitting in front of her, and she was saying, "Yes, it's me," all nonchalant like I see my dead mother back to life and beautiful every day. By the end of the dream, I was deeply resentful of her, and I don't even know why.

There was a con here in Dallas recently, where both Katee Sackhoff and Jamie Bamber appeared. I would have pushed past my crowd-shyness to see the two of them. Hell, I would have worked the thing to see them. I desperately wanted to go, but money was, as always, an issue, and I wasn't able to go.

I did get to spend the weekend with my smut-writing/TV friend instead, but things are different with her new relationship. Do I begrudge her the happiness? A thousand times NO. Do I still wish she had time for me that wasn't divided twenty different ways? Of course. We didn't even get any writing done, and not a whole lot of TV, for that matter. I came back to the house feeling exhausted rather than renewed for the first time ever.

My thirty-year high school reunion is later this month, and I won't be able to go. No way to get there, and no place to stay if I did manage to get there. My car's inspection and registration are both expired, and to pass inspection would take money I don't have or a deeply dishonest inspection station. Without the inspection, no registration. Those new state databases tell the state when your car's not inspected, and they won't give you a registration sticker any more - well, Texas won't. Not that I have the money to pay for it anyway. :sigh:

Thanksgiving's next month. I'd gotten used to going to my friend's house, spending the holiday with her, hosting Airmen for their first real break from Basic Training in weeks, and last year because her husband was home from Iraq, I didn't get to go. Not even sure why. He likes me fine - we get along well most of the time. I haven't even bothered to ask this year, because I when I texted & emailed her about reunion weekend, she never answered, and he's home for good. He's not retired, but for medical reasons, he won't be going back to the middle east.

So, whatever. I'm having a pity party, I guess. I miss my kid. I miss my grandson. I miss San Antonio. I miss my entire family, who aren't speaking to me for their own reasons. And yeah. I miss my mom.

My writing is frakked. Mostly I haven't been able to write, and when I do finish something, I'm not satisfied with it. It's been three weeks, and that, probably more than anything else, is getting me down. The thing I've used to cope for the last year is failing me, and frankly, considering where I am emotionally, that scares me.

On the other hand, things that make me smile: 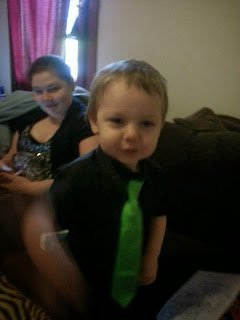 The other gramma was in Italy to visit the kids, and this was Baby Potatohead getting tired of gramma taking pictures of him. Love the attitude.