Since the death last month of one of my daughter's classmates, and his memorial service, I've been in a heightened (deepened?) state of nostalgic melancholy.  I saw the classmate she'd been closest to at her freshman year, and that was almost as hard as being at Trey's memorial service, in some strange way.  G was a wonderful boy and he loved my daughter practically from the moment they met.  They became dance partners and oh, my kid was happy when she was dancing!

Then we moved, had to, leaving all her friends, including G, behind, and she really disliked me for a while.  I didn't have the money to drive back to C-Town very often, even if it was only twenty minutes away.  What?  I was unemployed.  I managed to keep the stupid cell phones turned on most of the time, and we had a place to live, so I kinda figured we were ahead of the game.  Driving back and forth so she could see her friends in person didn't seem like a necessity.

Anyway, I guess seeing G and remembering that one happy year of high school settled in and made some part of me wish that she could have stayed as happy as she was her freshman year, and that we could have continued to function as well together as we always had (with a few exceptions - no parent/child relationship is without tension).

Maybe it  mixed in with some belated empty-nest syndrome.  It's been a little over a year since she moved out completely, and all but stopped talking to me for a while.  Those first couple of months, while I was still packing and moving, weren't too bad, but I missed my grandson and talking to my girl every day something awful.  Then I couch-surfed for a few months, and being on my best behavior sort of meant not moping around about my kid or my dysfunctional family.

November was harder, because I was unable to make my annual trip to San Antonio to see my friend from high school and do Thanksgiving with her and host our Airmen and just in general be "home" with antiquing and breakfast tacos and Sonic drinks every day and all the Mexican food I could manage to eat.  I look forward to that recharge all year long, and though I understand her situation, I selfishly hated that it got in the way of my needs and wants.  I did my damnedest to sleep through Thanksgiving, since I had nowhere to go.

Having nowhere else to go was stupid, considering that my parents live half an hour away.  Last January, after my stepmother bought me a car (one cannot really effectively job search or work without a car in DFW), she came out and said that she wanted me out of her life and except for sending her birthday cards I've completely respected that.  Last Thanksgiving, it wasn't a big deal, because of my annual trip to SA.  But I was not invited to their house at Christmas, not even for dinner.  Unfortunately, her need to see me gone means that I don't see or speak to my dad, either, and it hurts that he's made no effort to contact me.  This year was the first time in my entire life that I didn't get even an email or text message from my dad on my birthday.  I cried about that, you can believe it.  Yes, I'm 47, but I don't think a girl ever grows out of needing her dad to call her on her birthday.

I wished pointlessly that I had my own place, so that I could put a Thanksgiving dinner together and make it an open house or something, so that I could see other people and not be stuck in my own dark and dreary head/heartspace.  Don't get me wrong, I am grateful to have a place to live that is not a box under a bridge, but it is just a roof over my head, and though he says I'm welcome to invite people over, I rarely do because this place has never felt like home to me.  I also hate the kitchen.  I mean, I don't like to cook anyway, but this kitchen in particular is definitely a relic from a bygone era.

I think I had a point to make, but if I did, I don't recall what it was, and I think I've rambled depressingly for quite long enough.  Gah!

On a more positive note, I am still madly in love with Battlestar Galactica 2003 and Katee Sackhoff's Starbuck.  I managed to get my hands on the first two seasons of DVDs and am really looking forward to seeing all those deleted scenes and other extras.  I'm trying to ration myself, though.  The distraction's gotta last through Christmas, because I just don't wanna think about another one without my family.

And on another bright note, my grandson, he is adorable! 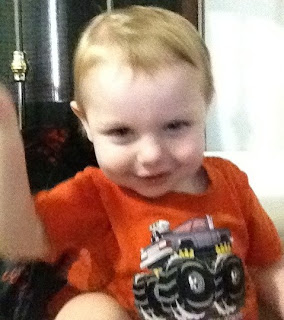 Email ThisBlogThis!Share to TwitterShare to FacebookShare to Pinterest
Labels: beingaparent, family, getting to know me, mental illness, random, TV